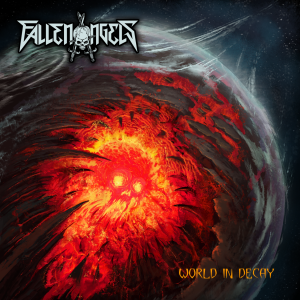 There have been far too many bands that have attempted to create their own renditions of the famous thrash that was rampant in the 80s, and the vast majority of those bands fail miserably. But here is Fallen Angels and their new album “World in Decay” that shows that thrash isn’t dead yet and this US band is the cultivation of decades of awesome thrash bands influencing this band to create an amazing thrash album. Everything down to the rhythm of the vocals and the melody of the guitars and drums show that Fallen Angels have truly heard and know how to properly reciprocate every aspect of a good thrash band, and that has allowed them to create “World in Decay”. Straight from the beginning it is fast as expected, the vocals are more (if you ask me) Metallica-esque if I had to choose any classic thrash band and it all coalesced so well. I can say without a doubt in my mind that Fallen Angels is going to grow very well in the US thrash scene as they are just what thrash fans have been looking for, and when “World of Decay” comes out August 4th, people will only want more Fallen Angels.

WATCH the music video for “Nightmares” off of “World in Decay” via YouTube below.